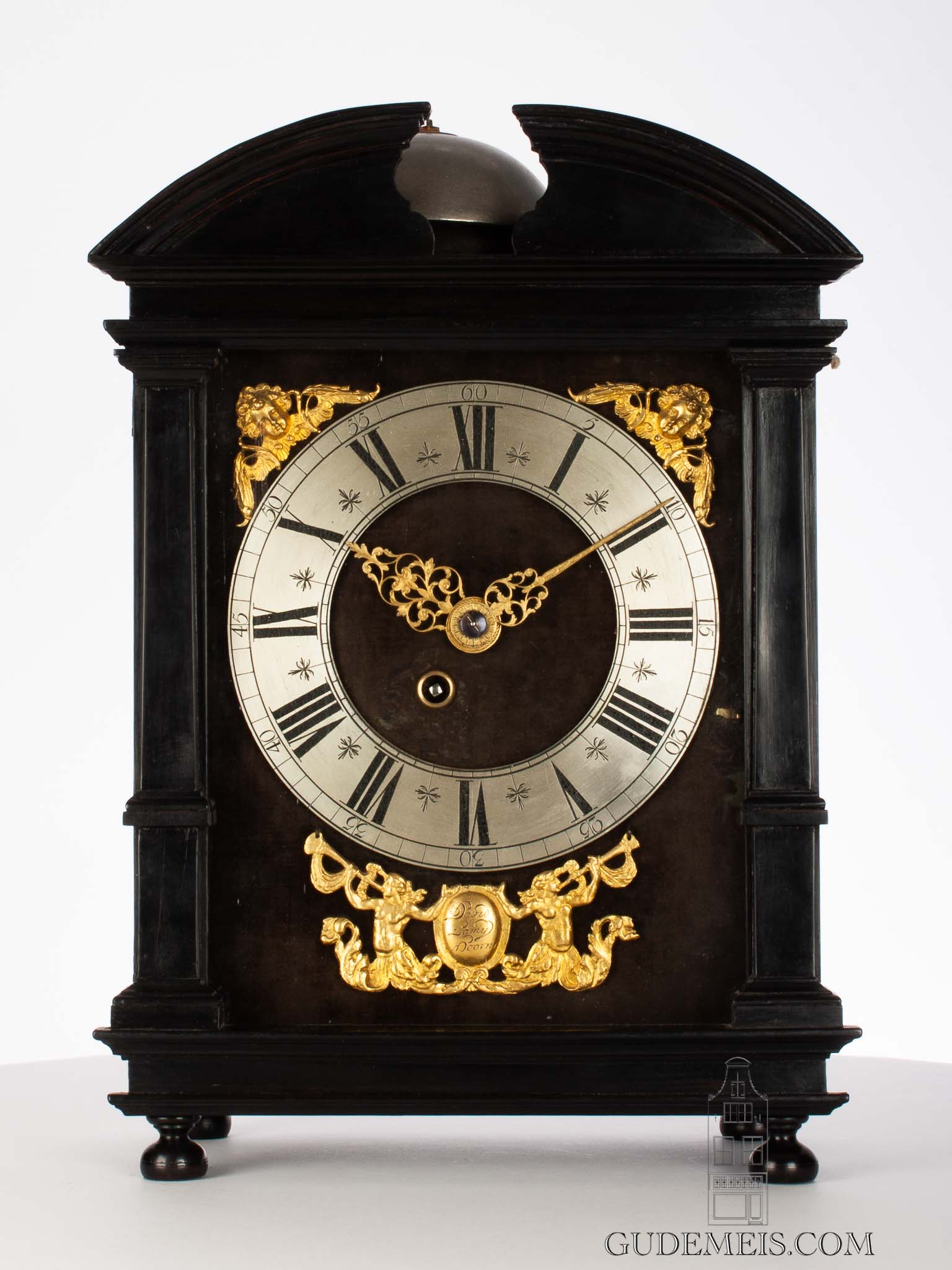 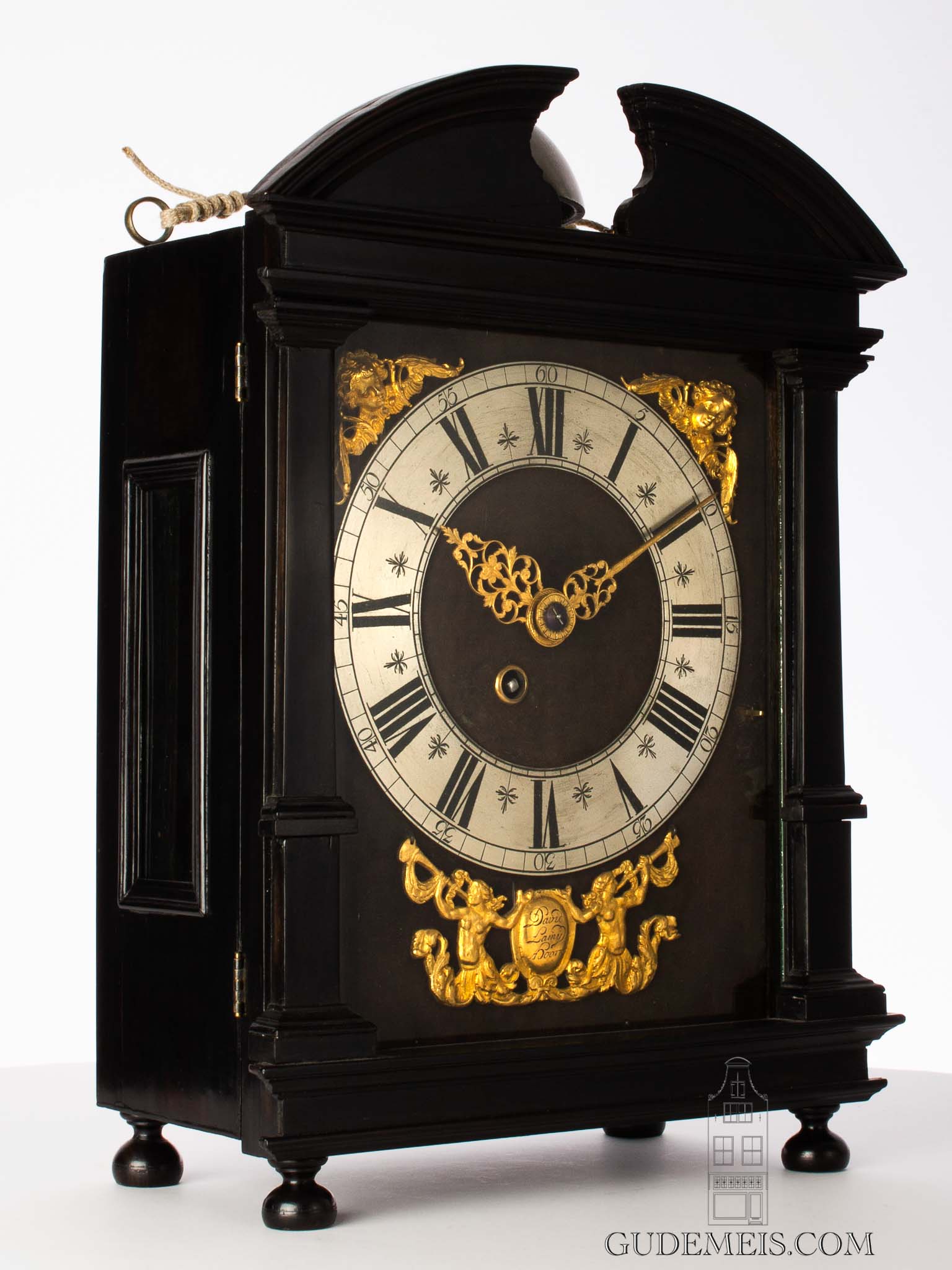 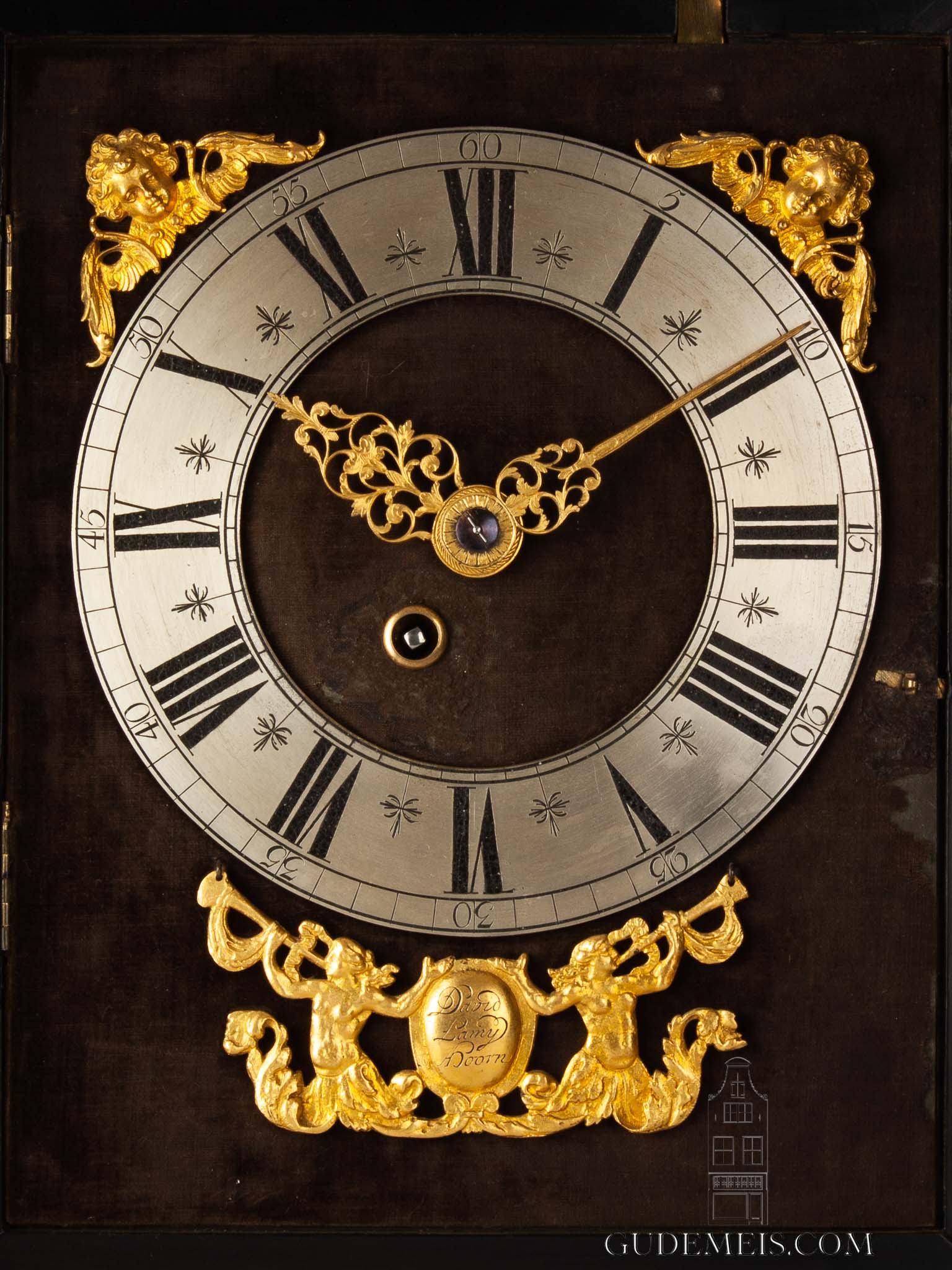 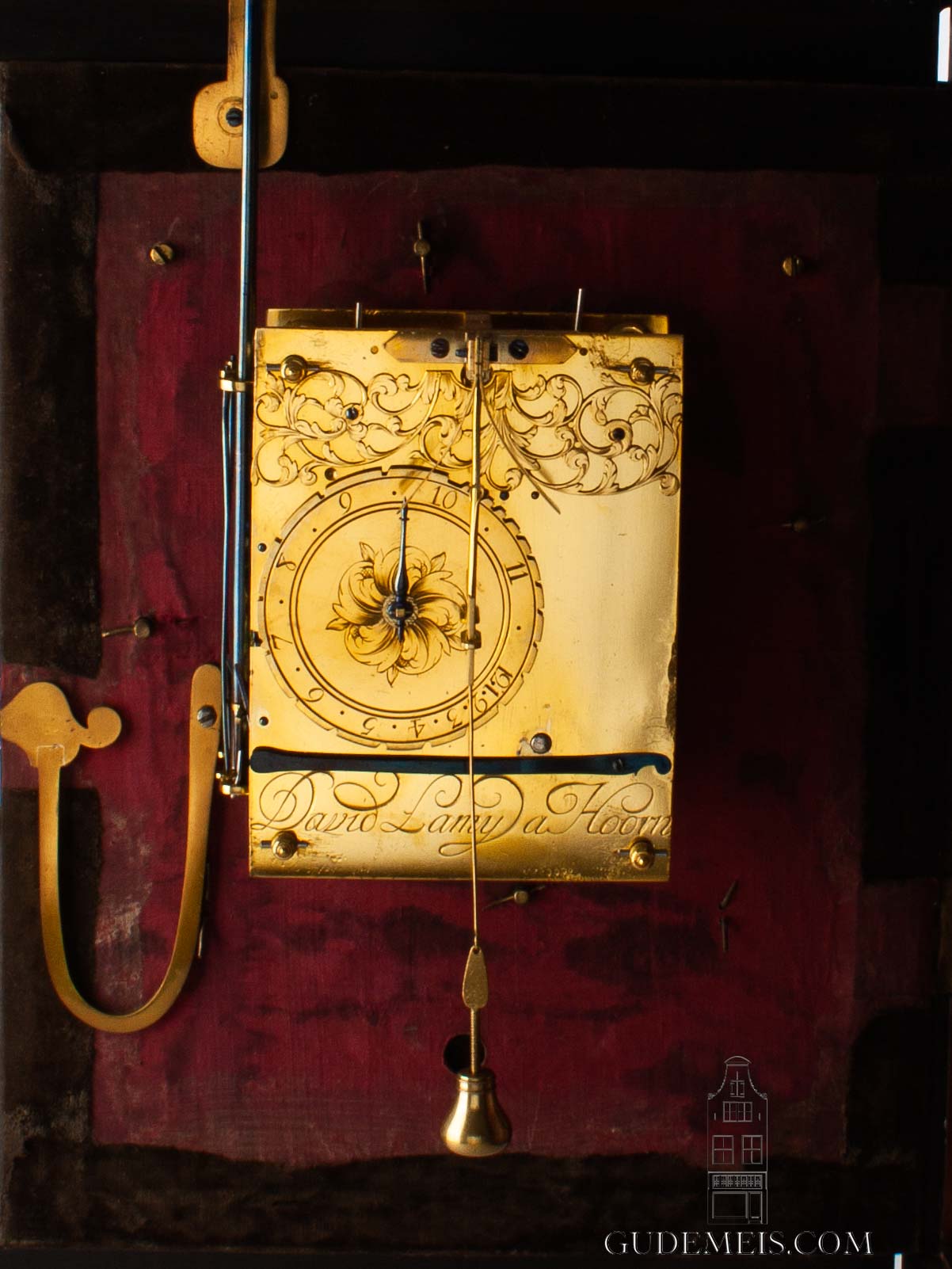 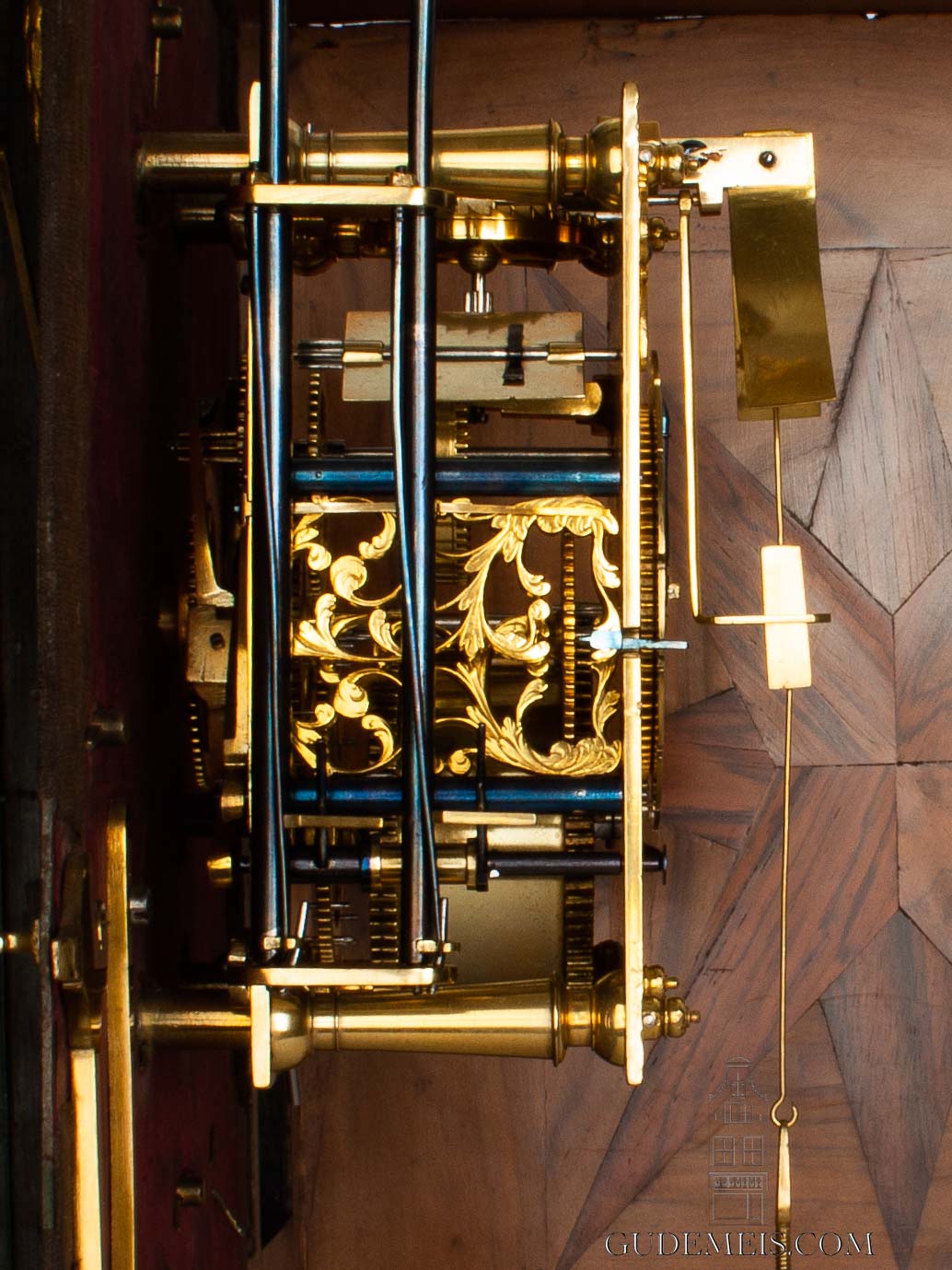 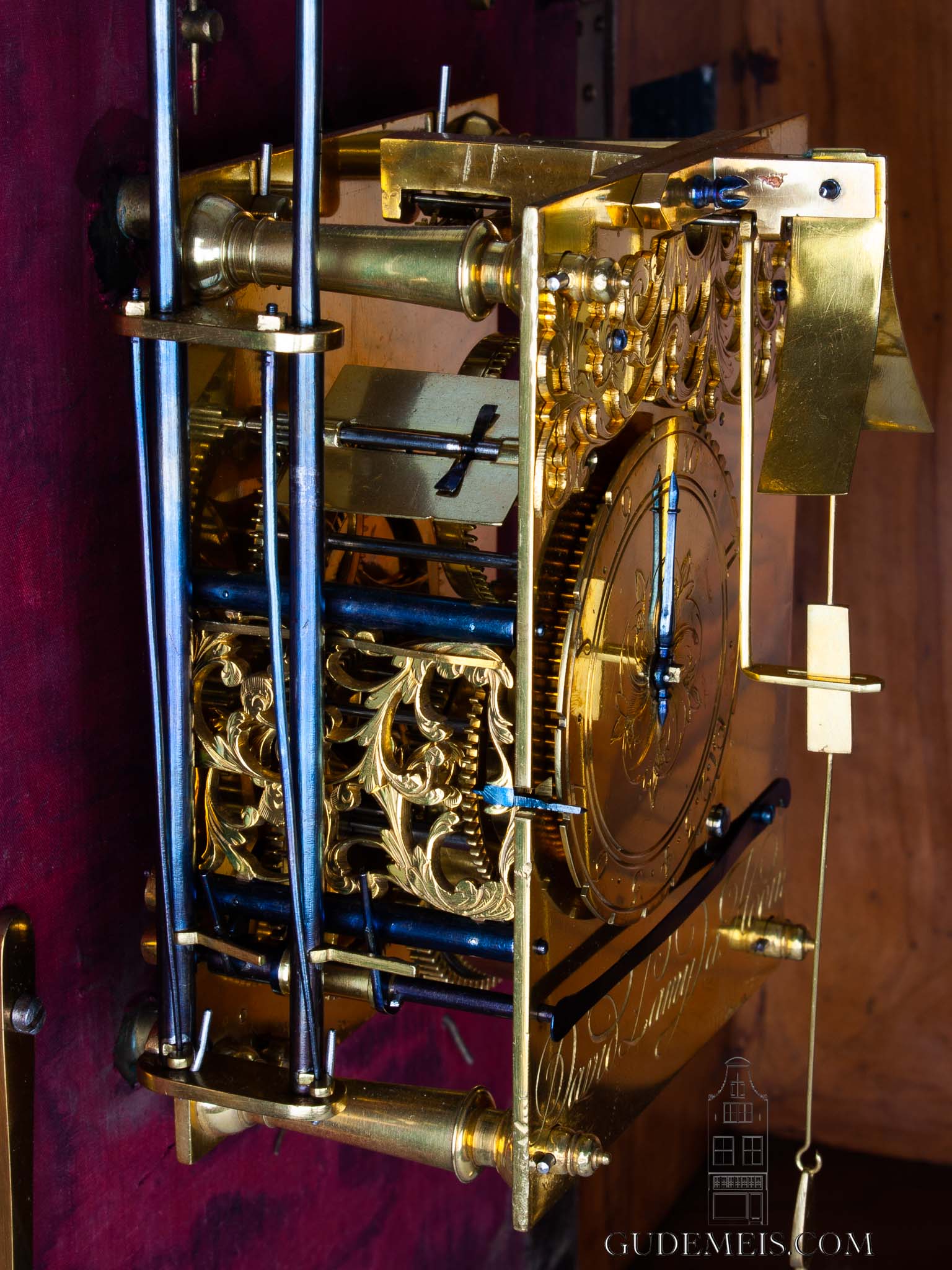 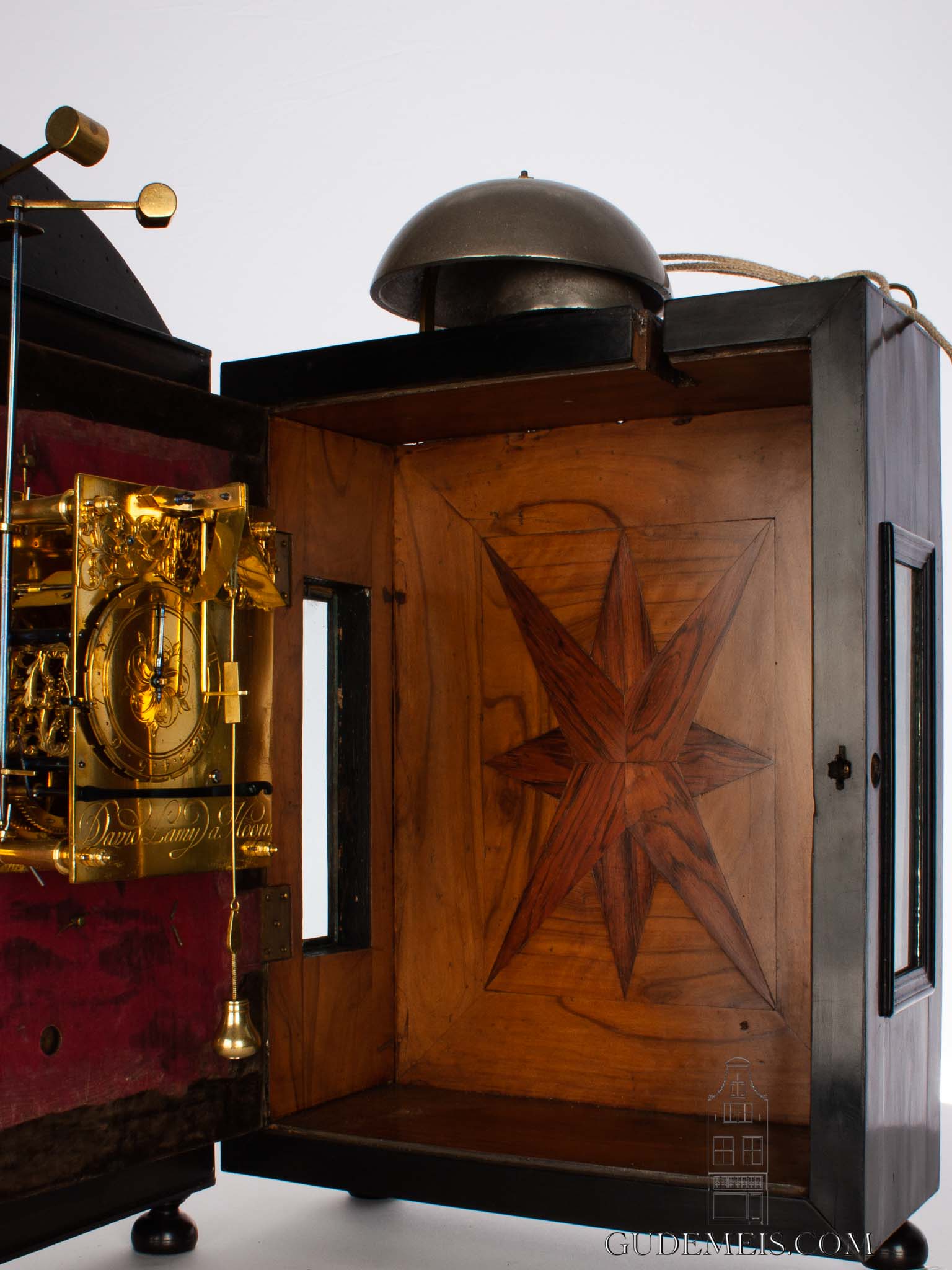 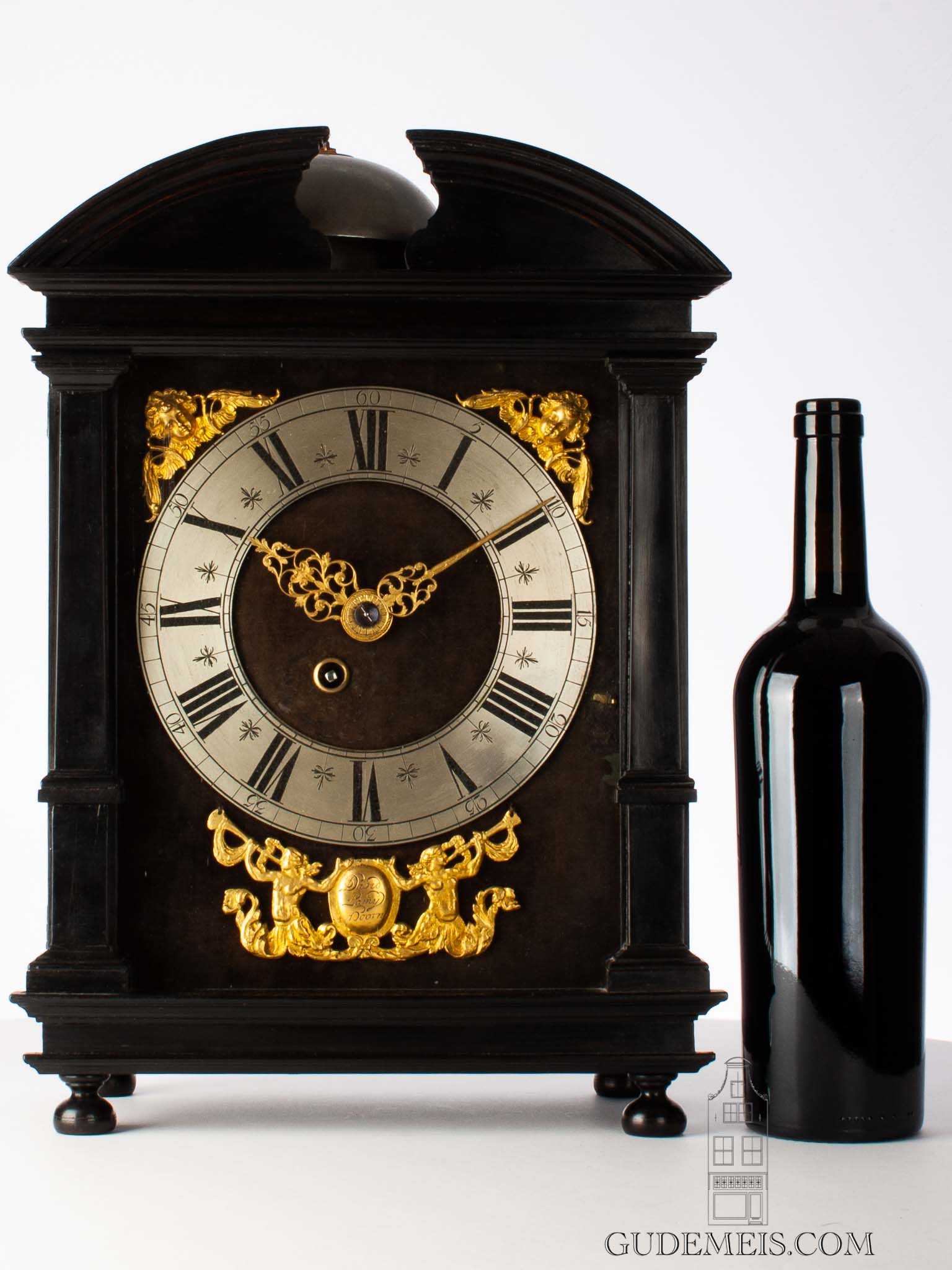 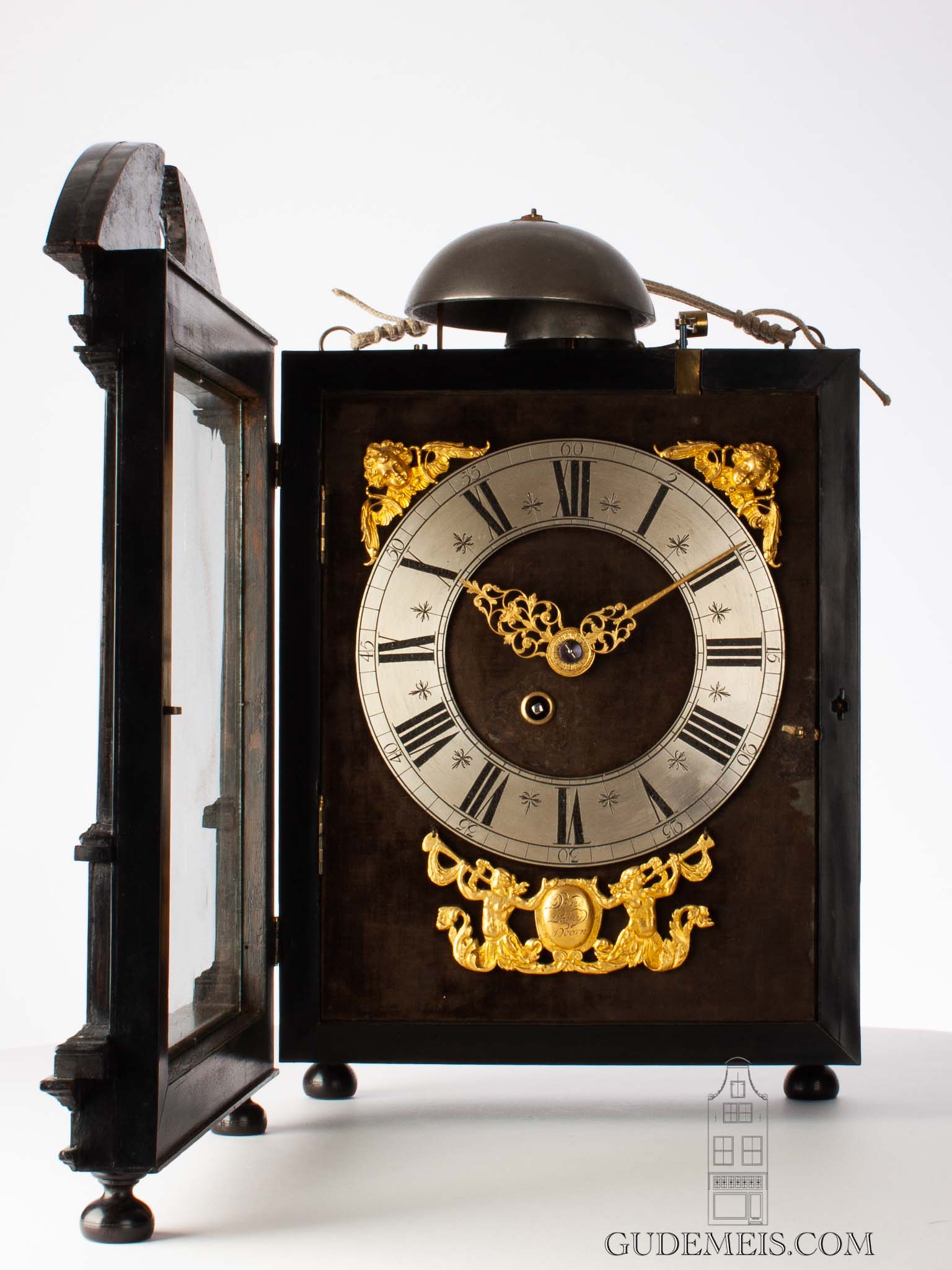 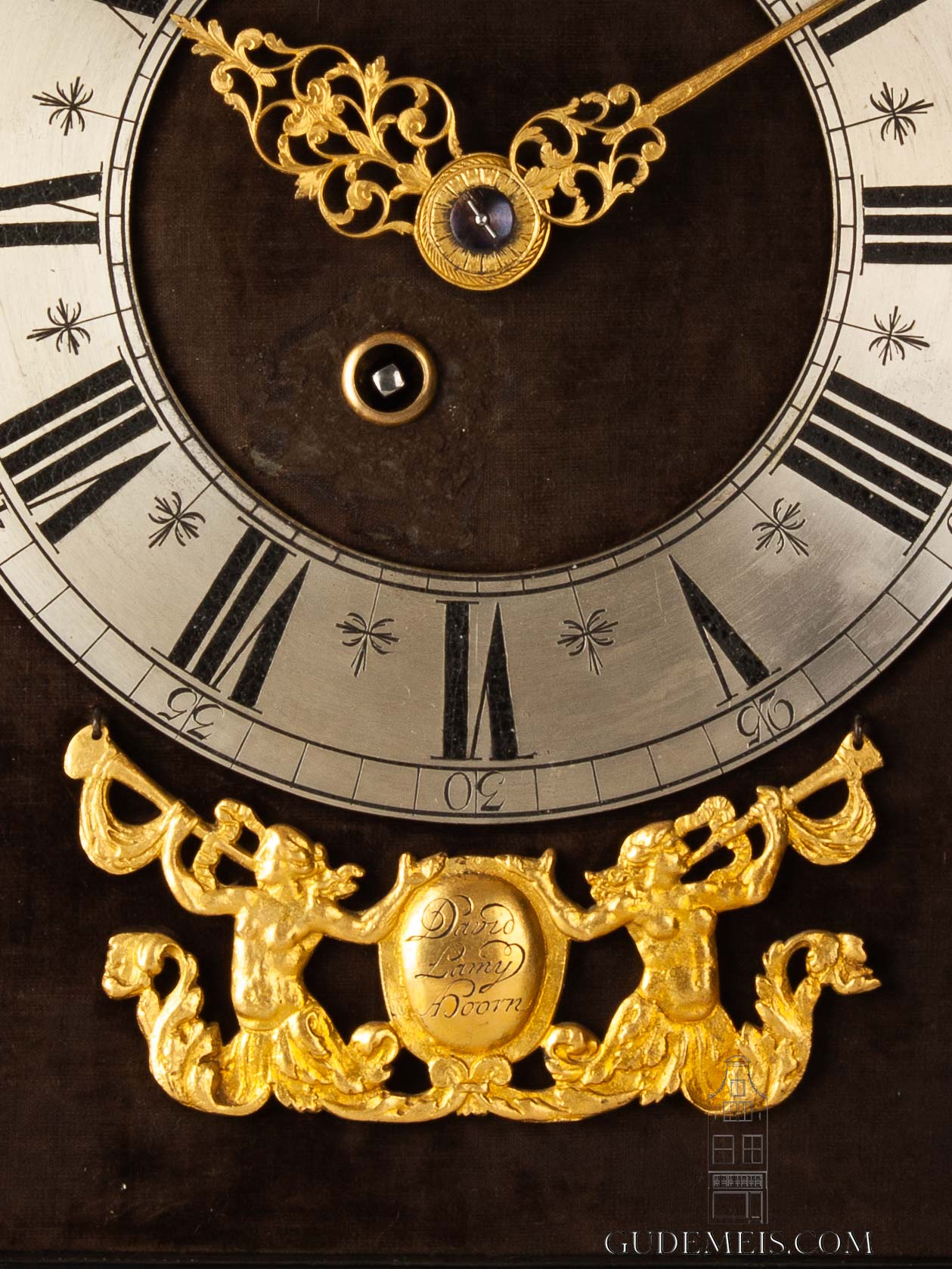 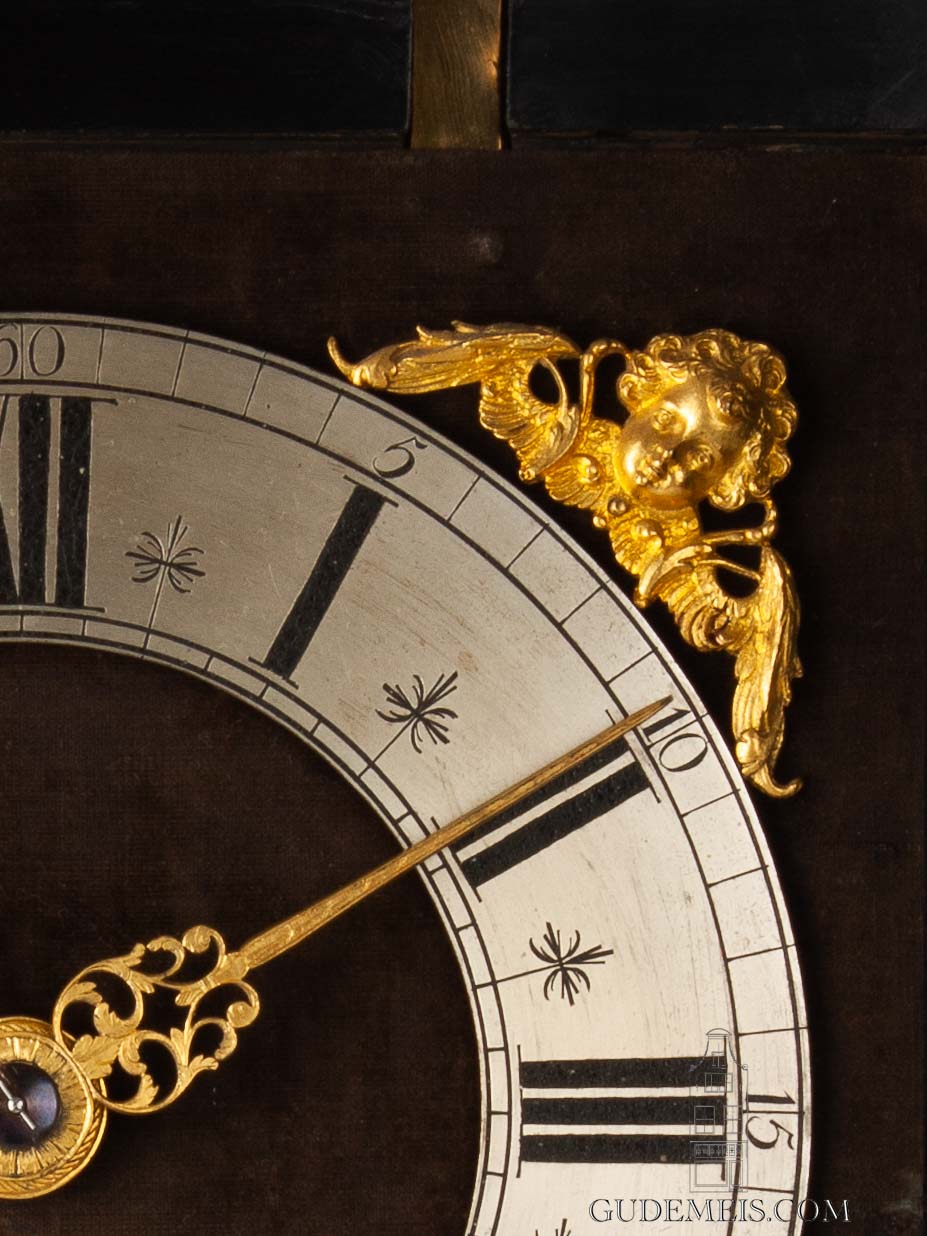 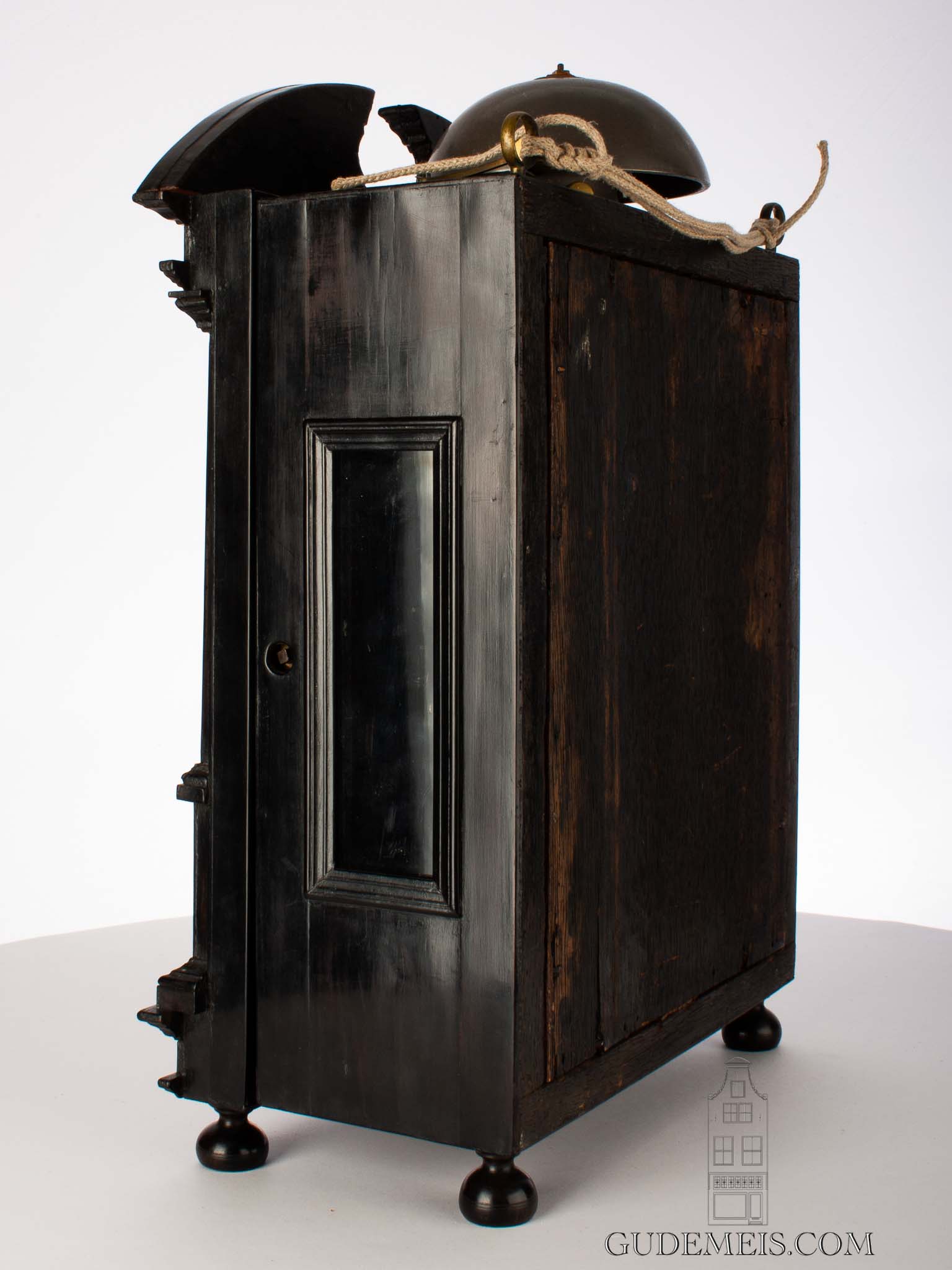 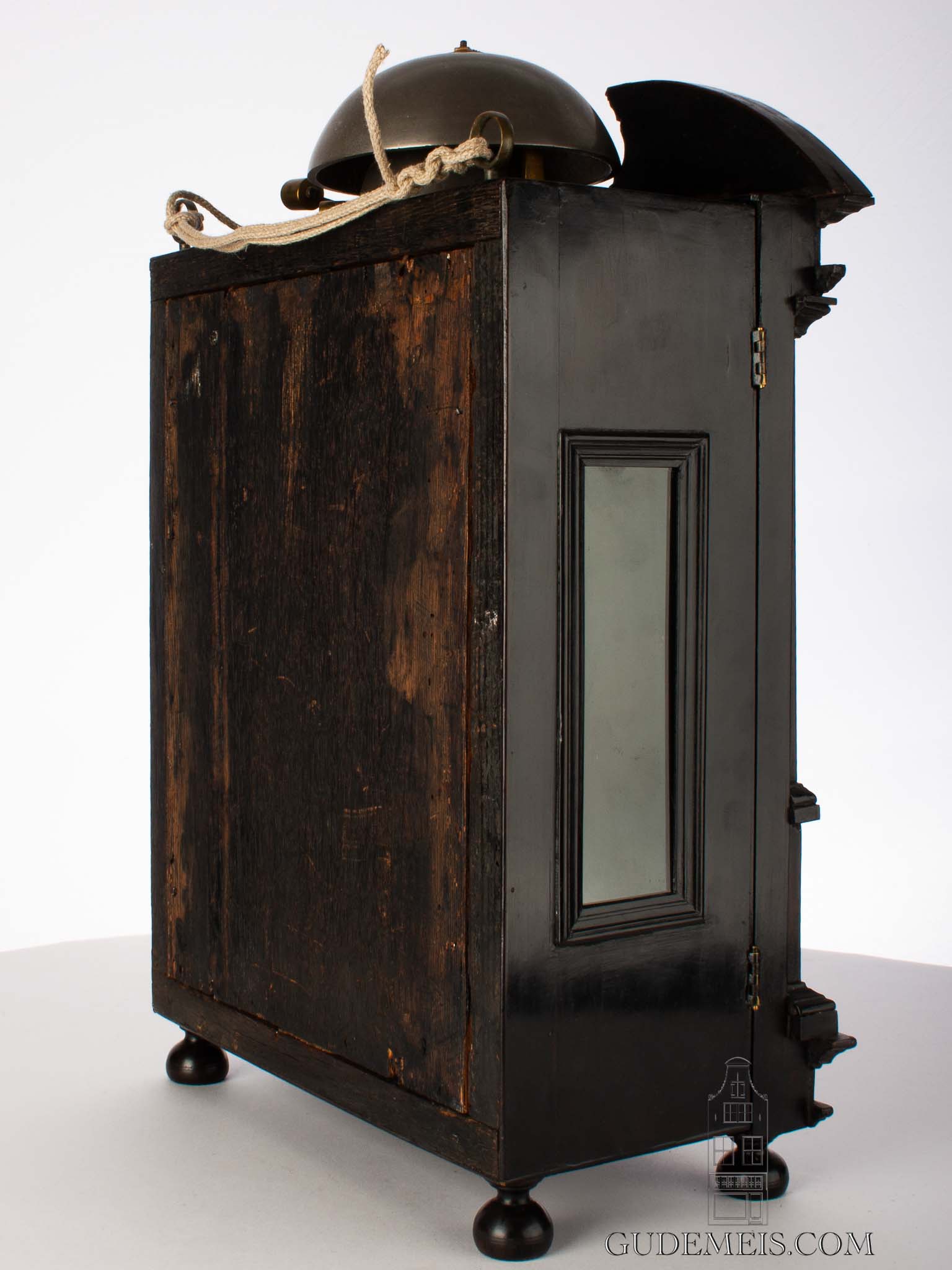 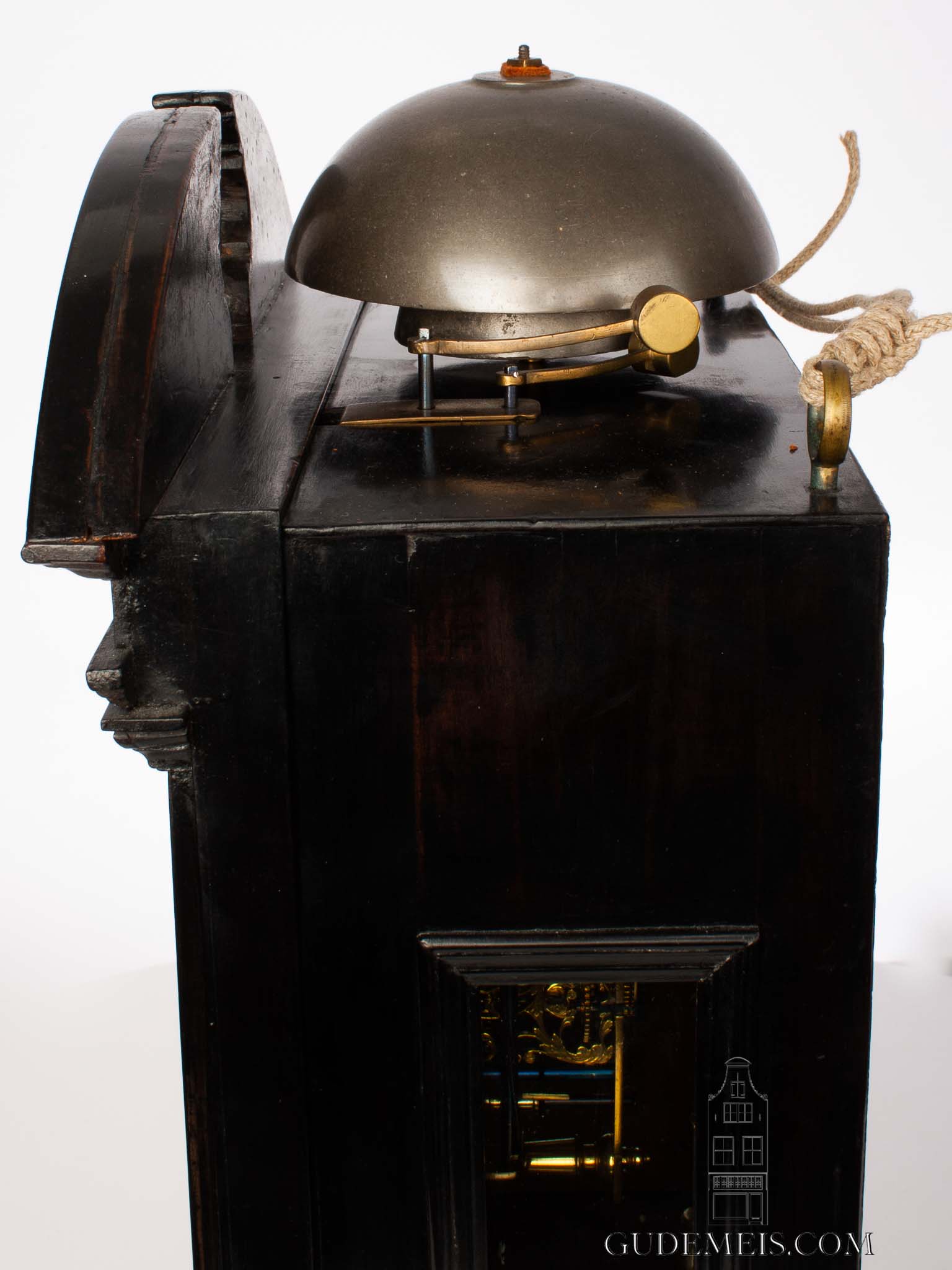 Galileo Galilei already discovered in the early 17th Century that a pendulum swings regularly independent of the width of the swing. Christiaan Huygens was the first to design a clock movement that was regulated by means of a pendulum (december 1656) Before this invention clocks were very unreliable and ten minutes loss or gain a day was not uncommon. Now this deviation was reduced to mere seconds a day, an astonishing improvement! Huygens was a scientist and not a craftsman. Therefore he had his clocks made by Salomon Coster from The Hague. Other clockmakers started making clocks based on this principle. The group of first pendulum clocks from The Netherlands are called ‘Haagse’ (from the Hague) Clocks after he city these were first made.

David Lamy (1669 – na 1712) was a Hugenot from Dieppe France who fled via England to Hoorn in 1688. He is recorded being in contact with Fromanteel in Amsterdam. He married in 1698 and worked in Hoorn until his death. There are several other clocks known by him among which a longcase clock in the ‘Westfries’ Museum. This clock has been on loan to the ‘Museum of Dutch clocks’ in Zaandam. It is described and depicted in the book by Plomp, Spring-driven Dutch pendulum clocks 1657 – 1710. PP.142 – 143.

The 22-cm wide brass hinged dial is covered with nicely aged velved. On it there is an applied engraved silver chapter ring with Roman numerals and five minute numbering. The beautifully foliate pierced and engraved hands are made of brass. In the upper corners are well cast and chiseled Cherub spandrels. Below there is a cast and chiseled brass ornament of two horn blowing mermaids flanking a cartouche which is signed David Lamy A Hoorn. The ornament is hinged and covers a hole in the dial through which the pendulum can be started with a stick.

The beauticfully executed brass movement has plates which are connected by finely turned baluster shaped pillars. It is driven by a single spring barrel powering both the going- and the striking train. It has a duration of thirty hours. The movement has verge escapement in combination with a two-piece pendulum silk suspended between cycloid cheeks. The clock strikes the whole and half hours fully on two alternating bells by means of a foliate engraved numbered countwheel. The striking train is executed with well made foliate pierced and engraved striking gates. The backplate has comparable ornament applied to the upper section, below there is the signature David Lamy A Hoorn.

The rectangular case is throughout veneered with thick ebony. The front door is surmounted by an arched broken pediment with beautiful mouldings. At the sides of the door are flat pilasters adorned with further fine mouldings. The back of the interior has a star marquetry panel. To the sides are rectangular glass panels surrounded by mouldings. The clock is mounted on the wall by two suspension hoops. The whole terminates in four pear shaped feet. 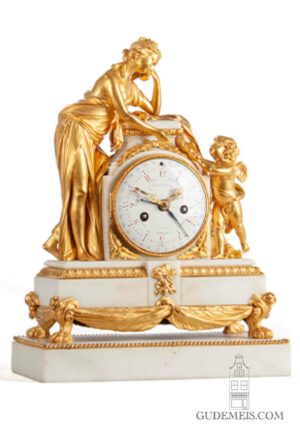 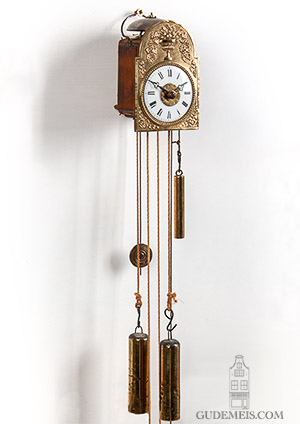 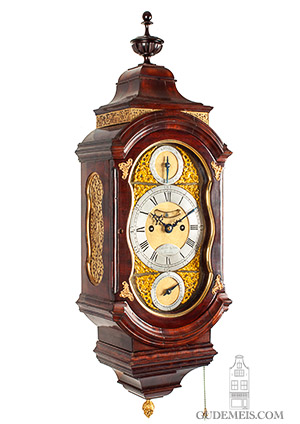 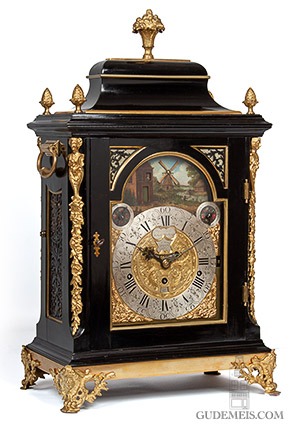